Nuit Blanche is an annual arts festival that happens in different cities around the world on the same night to celebrate and explore contemporary art. The origin of this event is from Paris, France, the organizer trying to turn the center of the city into an art exploration places in one night, using art to lighten the city. This year is the first year Nuit Blanche came to the city of Regina. Over 20 pieces of work were exhibited in the night on September 29th. With a wide span of work types, including interactive video installation, projection mapping, film, and interactive Virtual Reality (VR) installation, the festival attracted many citizens who came to experience art in public space.

The most popular work is an interactive Virtual Reality installation named “Transcending Perception” produced by John Desnoyers-Stewart for his MFA graduation in April 2018 at the University of Regina. This work, according to the artist “Allows participants to collaborate in the creative, improvisational production of multisensory experiences. Bodies and space are transformed into instruments which translate presence into performance.” In this playfulness work, the audience has two ways to interact with the work, put on the headset into a virtual world or easily step into the interacting area in front of the screen where people can be detected by the tracking sensor. The body shape will mapping on the screen randomly in one of three different effects: colorful lines, blue fragments or green dots. I was honored to be a guest artist involved in this piece during the Nuit Blanche as John went to Vancouver to start his Ph.D. program. I was playing as the project coordinator to prepare all the equipment, arrange for rehearsal, and testing the program. For Nuit Blanche night, this project also involved other artists in the field of dance, sound, improvisation performs, poetry, and music to perform with the virtual reality works. Each performance time lasts around 10-30 minutes. The space for showing the work is an unused shop, we build up a large screen for the main projector, also using two sidewalls as the second and third dimension. After 7 pm, the audience starts coming inside to try the work. There is always an unexpected situation that happens in interactive art as the audience, on one hand, invited to involved in the work, on the other hand, they are also the factor of the “surprising side” of the work. The first group of performers should start their performance at 7 pm, but at that time too many audiences would like to play around with the work, especially some kids. The performers prefer to not disturb the audience. So they postpone their performance. This work has a very good quality for the audience to simply play, and get immersed in the space. So the whole night, from 7 pm till midnight, this work is the most popular work that attracted the most audience. And for sure the weather actually also a push factor, it’s a very cold night and even snowing in Regina, people really want to stay inside to experience.

For me, to participate in an art event that involved the masses to explore art in the public space in the city of Regina is excited because it’s rare in this city. I know there are several art galleries and museums in the city, but turn the downtown area into an art center is really excited and challenged. There are two aspects that make this event special and different from the other art events in the town: space and time. The spaces for exhibit works from inside to outside, the Regina Public Library (Theatre) and the Dunlop Art Gallery, Victoria Park, City Square Plaza, FW Hill Mall all became part of the whole event. At that night, the event eliminates the boundaries between different places which have a different function in daily, all these public places also become a part of the whole art exploration. The limitation of the exhibited time is also a highlight in this event, it only happens in 5 hours, from 7 pm to midnight. Unlike other exhibitions last around months. The Nuit Blanche happens like a tornado.

A question for me to think about would be what is the meaning for an event like Nuit Blanche happens in the city with such a special time and place? For the audience, playfulness probably the main factor here, they feel interesting and have the accessibility to be part of the work. That’s probably one of the natural advantages of interactive art. However, for artists, this can not be the internal core of the work. Through my art practice and research, what I am trying to explore is to create a mirror-like environment that no matter in virtual or in reality, people can have the non-daily experience to perceive the moment of sensory slippage by using sciences and technologies, as well as the medium like light, sound, and wind. I hope for next year’s Nuit Blanche, I can participate with my own work, and to see how this idea goes. That’s must be lots of fun to observe and improve. 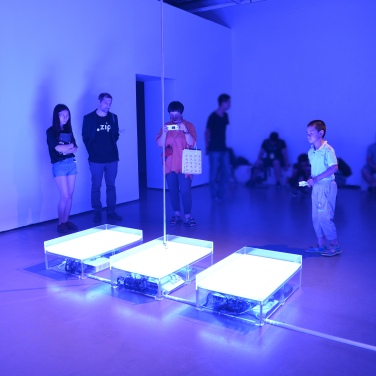 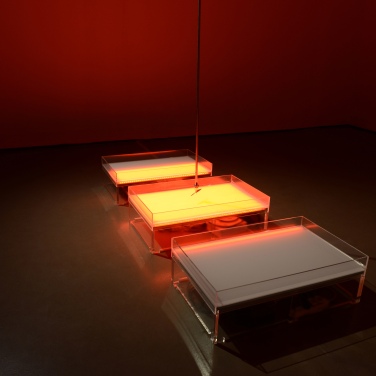 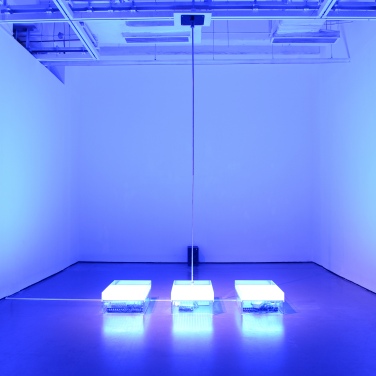